Mixed martial arts (MMA) is the purest, regulated form of full-contact combat sport. With relatively few rules compared to other combat sports, spectators are bound to witness some gruesome injuries.

There have been plenty of them in the UFC over the years, but thankfully most of them have not been “serious” enough to do long lasting damage that prevents the fighters from competing again.

UFC 249 returns this Saturday (9th May, 2020) in the midst of the COVID-19 pandemic. The card is headlined by an interim UFC lightweight title fight between Tony Ferguson and Justin Gaethje – two men known for their aggressive fighting style. Tony Ferguson is particularly known for the battered and bruised state that he leaves his opponents in.

Let’s look back at some of the most gruesome injuries sustained by fighters in the UFC over the years.

WARNING: Graphic images, do not proceed if you have a weak stomach for blood.

Jedrzejczyk sustained one of the worst hematomas ever witnessed in MMA in the 3rd round of her bout against Weili Zhang at UFC 248. Despite the swelling getting worse as the fight progressed, the former UFC women’s strawweight champion carried on fighting till the end of the 5th round. Jedrzejczyk lost the fight to Zhang via close split-decision, but despite losing many fans and fellow fighters called it the “greatest fight in women’s MMA history”.

Jedrzejczyk returned to her home country of Poland, where she had surgery and has since made a full recovery.

One of the worst injuries in UFC came in this heavyweight clash. The fans saw Alistair Overeem suffer a really nasty cut on his lip that required plastic surgery to fix. With just seconds to go in the final round, Rozenstruik landed a monster right hand right on the mouth/chin of Overeem. The punch sent Overeem down to the canvas and the referee called a stop the action right there and then. It split Overeem’s lip almost right up to his nose.

The dutch heavyweight had plastic surgery on his wound following the bout and now looks brand new.

In this women’s bantamweight bout, Jessica Eye landed some good punches on her opponent Leslie Smith in the 1st-round that opened a cut on Smith’s ear. When the two fighters came out for the 2nd-round, Eye appeared to target Smith’s ear with more shots that eventually “exploded” it. A splash of blood could be seen coming from the wound and referee Herb Dean paused the contest to have doctor’s look at the injury. The bout had to be stopped due to the doctor’s having to work extensively on Smith’s ear. It might not be one of the worst injuries in UFC history, but it certainly is one of the most gruesome.

Leslie Smith recovered from the injury and has gone on to compete 6 more times following her bout against Jessica Eye.

This might be the most famous injury ever witnessed in the sport of MMA and is certainly one of the worst injuries in UFC history. Anderson Silva is widely regarded as the greatest middleweight MMA fighter in history. After making 10 successful defences of his UFC middleweight title, Silva’s run had come to an end after he suffered a knockout loss to Chris Weidman at UFC 162. Many fans felt that this victory was just a “fluke” or a “lucky punch”, so a rematch between the two men was set to take place at UFC 168. Silva once again lost the bout, however this time it was due to a leg injury he suffered when Weidman blocked one of Silva’s kicks. Silva’s shin completely snapped with his leg folding in a way that it’s simply not supposed to do.

Silva had a long road to recovery, but eventually came back from his injury and has competed 6 times since then.

The youngest light-heavyweight champion in UFC history Jon Jones defended his title for the 5th consecutive time against Chael Sonnen at UFC 159. Jones is widely regarded as the pound-for-pound (P4P) best fighter in the world, so it wasn’t a surprise when he beat the former UFC middleweight title challenger Chael Sonnen via TKO (elbows and punches) inside the very 1st-round. Even though the fight was short, Jones suffered a gruesomely dislocated phalanx (big toe) during a takedown in the middle of the fight.

Jones has since fully recovered and competed 9 more times since then, still remaining undefeated.

When the UFC added new lighter weight classes to its roster, Jose Aldo became the first ever UFC featherweight champion. He was set for his 1st-title defence against Mark Hominick at UFC 129. This also happened to be the largest UFC event to date, with over 55 thousand fans in attendance. Hominick was the hometown fighter, so its no surprise that fans were left gasping at the sight of the gruesome swelling on his forehead. Aldo managed to land some brutal ground-and-pound that caused Hominick to develop a huge hematoma on his forehead.

Hominick made a full recovery and went on to compete 3 more times following his fight against Jose Aldo at UFC 129. He has now retired from competing in professional MMA, but remains involved in charity work and anti-bullying programs with other UFC fighters.

The saying “snap like a twig” takes on a new meaning when you are 6’4″ tall, compete at lightweight and get your leg completely snapped in half. This is what happened to Corey Hill, who broke his right leg while throwing a kick that was blocked by his opponent Dale Hartt. The injury is very similar to what happened to Anderson Silva against Chris Weidman at UFC 168, but pre-dates it by 5 years.

Recovering from this injury was expected to take 12-18 months and Hill stated that he was grateful for the support he received from the UFC and feels “indebted to them”. Hill has competed professionally 11 times since then.

When two of the best heavyweight grapplers go against each other, chances of seeing a limb break are pretty high. This is exactly what we witnessed when Frank Mir trapped the Brazilian legend Antonio “Big Nog” Rodrigo Nogueira in a tight kimura following an intense ground battle. Nogueira attempted to escape the submission and refused to tap, but it was too tight and resulted in Mir snapping his arm (right humerus). Despite it being one of the worst injuries in UFC history, Dana White called it “submission of the century”.

Nogueira recovered from his arm injury and returned to the Octagon less than a year later. He has competed 4 times since his last loss to Frank Mir.

The broken nose isn’t just one of the worst injuries in UFC, it is one of the worst in MMA, period. Mike Perry threw down against the Brazilian striker Vicente Luque at UFC Fight Night 156. Unfortunately for Perry, he was on the receiving end of a flying knee that completely mangled his nose.Being the warrior that Mike Perry is, he carried on fighting and made it all the way to the final bell eventually losing a split-decision to Luque.

He required surgery to get his nose reconstructed and returned to action just 4 months later.

This might be the worst injury in UFC history due to the permanent nature of it. Michael Bisping is known for his toughness and being a “true fighter” and his injury proves this. He faced Vitor Belfort in the main event at UFC on FX 7, losing to the Brazilian fighter via head kick knockout in the 2nd-round. Unfortunately for Bisping, the kick did permanent damage to his eye that resulted in his eyeball having to be completely removed.

Despite doctors advising him to retire from the sport, Bisping went on to compete more than 10 times since then and even won and successfully defended the UFC middleweight title before retiring in 2017.

This article first appeared on CLOSEDGUARDMEDIA.com on May 8, 2020. 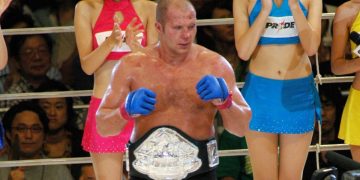 Test of Toughness – Ferguson vs Gaethje